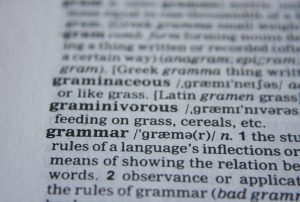 Today, I wanted to talk about grammar and how we can use it creatively. The thing with grammar rules and conventions is that they are ever changing and things go in and out of vogue. Often, opinions differ as to what is and is not acceptable at any given time, and it can feel like a lethal quagmire for us mere mortals trying to produce a book. As fictional writers, we can use this to our advantage.

While there may be a temptation to go with absolutes, this can limit us in so many ways. As with general rules of writing, we first have to learn them, and then we can–with care–bend and break them from time to time. And just because something is no longer popular or used a lot, it doesn’t make it incorrect or taboo.

‘Seconds ache by as I watch the door, waiting, though I do not know why. Waiting will not bring Binta back. It shall not allow me to enjoy her melodic laugh. But still I wait, freezing when the door reopens. I turn back to the vase and retch once more, not stopping until the guard passes me again. His metal-soled boots clink as he heads back down to the throne room. The scroll is no longer in his grip.’

Not only does the author use descriptives so beautifully, but she also has no fear in employing the currently out of vogue ‘shall’. Here, in two consecutive sentences, she interchanges ‘will’ with ‘shall’ to avoid repetition. And in changing that one little word, she has the astute reader sit up and take notice.

Another great use of outdated grammar that I read recently comes from Margaret Atwood’s ‘The Handmaid’s Tale’, in which she utilises old versus new. In her example, we see that we use ‘What are you waiting for?’ more as a statement/demand of ‘Hurry up’ than an actual question. However, ‘For what are you waiting?’ asks a specific question.

As well as the above utilisations, we can use such grammar to denote social class and geographical location. For example, in Britain and certain parts of the north American continent, people use ‘shall’ in everyday language and speech, whereas in other places, this has become outdated. A low-income, poorly educated person would be highly unlikely to use the word; however, the opposite of that also remains true. The same with the above use of ‘For what are you waiting?’

Another argument that has raged for seeming aeons is the use of contractions. It used to be outlawed. These days, the opposite proves the case. It is unnatural in dialogue to say ‘I do not’ instead of ‘I don’t’ and ‘They are going’ instead of ‘They’re going’, etc. Once again, though, we can use such conventions to aid our characterisation and get a certain message across.  In anger, when we grit out one word at a time, we would tend to say it in full rather than using contractions.

So, grammar conventions can denote not only social class but also mood and tension as well as geographical location and mannerisms. For example, people from certain parts of Ireland tend to finish their sentences with a ‘but’, which is otherwise hugely incorrect. Some folks use ‘like’ a lot, whereas others use it not at all.

In a recent short story, I made up a word altogether, as nothing else quite fit. The sentence I wrote was, ‘Edward Shackton Jnr had caught him red-handed and left him red-behinded.’ Of course, ‘behinded’ is not in the English dictionary, but for me, in this context, nothing else felt as effective. In yet another short story, I have used ‘bestest’ because we are in the head of a six-year-old girl. Kids are renowned for misusing grammar in such a way that it sounds perfect and so much simpler!

Another major difference between nations as regards England and America: ‘shined’ [American] versus ‘shone’ [English]. In the UK, ‘shined’ is an outright error, whereas it is the norm and within the Chicago Manual of Style rules to use ‘shined’ in America. Yet another is the use of ‘Sir’ for a child addressing a parent or male adult. In the UK, our children just don’t use this anymore. However, in a vast area of America, it is used daily with dire consequences if dropped … it denotes a lack of respect.

On a final note, the genre we’re aiming for affects the kind of wording we use too. In a horror, for example, we would avoid overly-romantic or soppy terminology, whereas this would be perfectly okay in a romantic read.

So, to summarise, grammar and word use helps us to show genre, social class, mood, geographic location, societal norms, and tension.

What speech mannerisms that might not be strictly conventional have you given your characters? Have you given this much thought before now? I’d love to hear what you think, so let me know in the comments below.