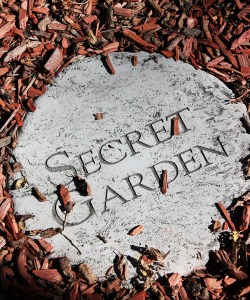 Hello SErs. Harmony here. Have any of you heard of a walled garden for fiction? I hadn’t until last year. And once I saw it in one place, I came across it in a whole load of other places. Other names it goes by are Magic Garden and Secret Garden. With my current WIP, I created a whole new world based on settled space and realised I could use this idea for lots of other books and short stories. That would be my secret garden.

A walled garden is a body of work you build that shares themes, tone, structure, and word building.

Why does your garden need a wall around it?

Because this will become your secret playground. A safe place for your muse to hang out and have fun. … Without having to build a whole new world, etc., every time you start something new. It’s something that’s just for you that you don’t want other people seeing.

Until late last year, I had no fiction common ground between any of the books or stories I had written. And then I had a play. I took my novel The Glade and chose one scene. From that one scene, I wrote a 3,000 word short story, which used The Glade as common ground, but the rest of the story turned out quite differently, even though they shared the same basic idea and setting. What fun!

Ways to use your walled garden:

My current WIP is set on Exxon 1, one of 6 planets in the Exxon system. They each share two red moons. Exxon 1 is large and totalitarian, and it has no place names–just numbered zones.

I have other story ideas in mind that could make the Exxon system part of my magic garden. For example, my next novel will likely be set on Exxon 6, the furthest planet out in the system. It is also the smallest and the friendliest. Every part has a name given to it by the original settlers. However, the theme and tone will turn out quite differently from my current book. My novel in progress is dystopian and post-apocalyptic. The next one will be a scary one, more in the vein of Stephen King or Dean Koontz. Yet both share the same common ground.

The above example would fall into the last on the list above … creating a whole new set but with ties back to the original set. It’s still in the Exxon system, but it’s nothing like Exxon 1.

I’m finding that building and growing my walled garden is giving me lots of easy idea generation for both connected and unconnected stories of varying lengths.

Another use, not on the list above, is using your secret garden for promotion and

blogging. It isn’t on the list because, strictly speaking, it’s not writing fiction. One of the best examples of this use of your walled garden is Craig Boyack’s Lisa Burton with his wide range of artwork and the ‘radio blog posts’, etc.

I’d love to hear your thoughts on walled gardens. Do you have a secret garden? If not, would you like to give it a go? I look forward to seeing your thoughts and ideas in the comments below.

50 thoughts on “Your Magic Garden”