Hey, SE Readers. Joan here today with more of my thoughts on writing.

“Truth is stranger than fiction.”

Probably everyone has heard this quote or some variation. If you google for who wrote it, you’re not likely to get a definitive answer. Some say it was Lord Byron, while others attribute the quote to Mark Twain.

Even Tom Clancy got in on the game when he said:

“The difference between reality and fiction? Fiction has to make sense.”

Clancy was right. Truth is often strange, and life doesn’t always make sense. There are some things we can’t make up.

I’ve been a people watcher for years—long before I became a writer. Sitting in a crowded shopping mall, airport, or restaurant is at the least entertaining. Last year, I wrote a post about how we can use observations for story ideas.

But we also have our own experiences. And yes, some are indeed strange and in many cases, inexplicable. So why not use them in our fiction? 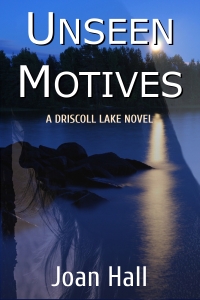 In Unseen Motives, the first of my Driscoll Lake Series, I have a minor character that sees something she can’t explain. Because she is recovering from severe PTSD and has suffered hallucinations in the past, she fears people won’t believe her. However, she records the incident in her journal, which later is instrumental in helping solve a twenty-year-old crime.

The idea for this came from a real-life experience I had at the age of seventeen. I’ll not go into a lot of specifics, but both my mom and I saw this. Flashing lights of an ambulance in our neighbor’s driveway awakened my mom one warm spring night. She awakened me. Knowing Sam (not his real name) had a heart condition, we assumed EMS was there for him.

Shortly after the ambulance pulled away, we saw Sam walk into his house. He even stopped to pet the dog that was sitting on the porch wagging his tail. That meant the ambulance had been there for someone else, right?

Wrong! Paramedics had picked up Sam, took him to a local hospital, and doctors pronounced him dead on arrival. It couldn’t have been him we saw. So what was it? His ghost? A hallucination? I doubt it was the latter, since both saw it. (And before you ask, we were wide-awake.)

I used another experience in the opening scene of Unseen Motives. The main character learns of her father’s execpected death. Having lost my own father suddenly, I was able to capture the emotions of a young girl hearing such tragic news.

Several years ago, a series of church arsons occurred in this area. When brainstorming

ideas for Unknown Reasons, I decided to bring in a serial arsonist. Although the fires didn’t affect me personally, the idea worked.

Family history stories are also intriguing. I once took a series of online writing courses. The final assignment of one of these classes required students to write a five-hundred-word short story. I decided to use an incident I’d been told about a great uncle.

I never met him as he died many years before I was born,

but he had his own encounter with a ghost. I used this incident as an idea for a short story I posted on my blog a few years ago. You can read The Dare by clicking this link.

A word of caution. If using family, be sure to change enough of the details so no one would be able to recognize themselves, especially if you portray someone in a bad light.

The last thing you need is an irate family member, or worse, face a lawsuit. Always use fictitious names.

Have you ever used real-life experiences in your story? If you haven’t, why not give it a try?