Hi gang! Craig with you again today. I’m in the middle of writing a trilogy, so take this info with a grain of salt. I’ve done my homework, and I want to share some of that here today. The topic is the “classic” trilogy.

You know as well as I do, that any three related books can be called a trilogy. Did you know there is such a thing as a classic trilogy and it has a pattern? Patterns are good for authors. We don’t always have to do the same thing others have done, but knowing about the pattern helps you elevate your game.

You might be thinking, “Yeah, yeah. Craig is the speculative fiction guy, so we’re going to talk about The Lord of the Rings.” Nice try, but we’re not. LOTR was actually one gigantic, whoppin’-big novel that got chunked up for publication purposes. 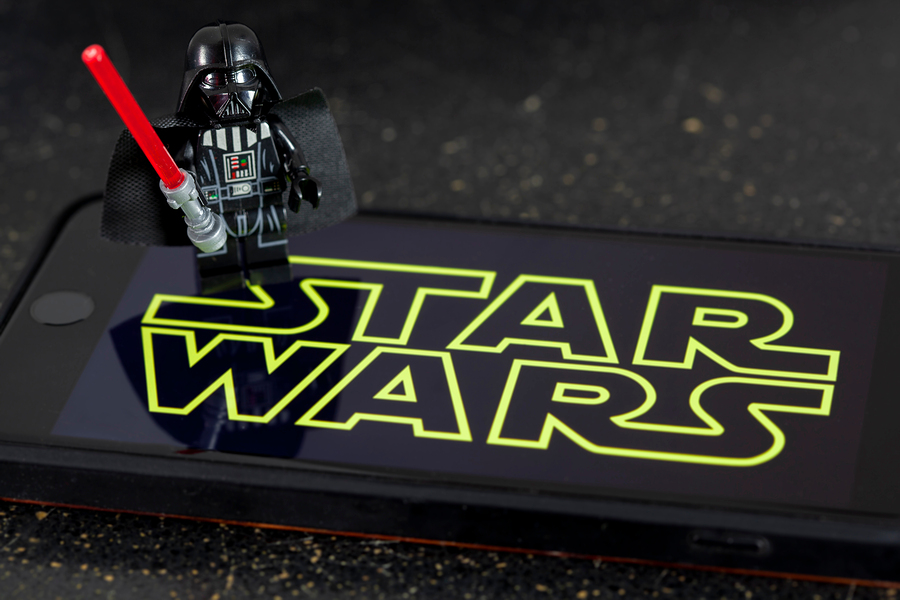 APRIL 28 2019: Darth Vader Lego Mini Figure with Star Wars wallpaper on an iPhone screen for Star Wars Day concept May the 4th Be With You

The original trilogy illustrates this better than any example I can think of. Let’s break it down, and I’ll add some personal experiences along the way.

Book One: We need to introduce the characters and all that jazz, but the story itself has another job to perform. It has to introduce the real conflict of the overarching plot without getting too deep into it. Book one is almost a microcosm of the story you plan to tell. It ought to be complete without ever reading one of the subsequent tales.

We have Luke Skywalker living on a farm that apparently grows dirt. It’s boring, and he’s even willing to join the military to get away from this place. This is good, because the classic trilogy has to have that exposure to new things, and your main character is the best way to reveal that. He comes into possession of two droids and this becomes a “Save the Princess” story. Travel is involved, and that’s just what you want.

Saving princesses is a classic tale, and nobody is going to pinch their nose at that, however, the real underlying purpose is to reveal an even bigger problem. Much bigger than one princess that needs saving.

When I wrote Voyage of the Lanternfish, I took this to heart. My damsel in distress isn’t a princess, but I went with the classic. There is plenty of story to flesh this baby out, but along the way my characters learned of an even bigger and more global problem. Okay, maybe I don’t have a universe at risk, but a world at war is bad enough.

Book Two: Okay, princess saved – check. Dragon slayed, drug lord thwarted, what have you. Now is the time to dive into that much bigger problem you revealed in book one.

Something has to prevent the hero/ine from high-fiving everyone and declaring it Miller Time. There is a problem that’s going to land on the front porch if your main character doesn’t keep on heroing. The bigger evil isn’t going to stop.

The pattern of book two is one of loss. Whatever the hero tries, there is likely to be a shallow victory, but a bigger failure.

Luke and friends escape from Darth Vader, minus one perfectly good hand, but the rebellion is scattered in an attempt to avoid total destruction. The characters survived, but lost the war. Things are looking pretty grim. That’s where the book ends. (Or film. Play along with me here.)

If you think about it, it follows three-act structure, but not quite. Act-two is usually the longest part of a story, but book-two of a trilogy is usually the shortest volume. This is because your trilogy vaguely follows three-act structure, but not completely.  The individual volumes should. (My books. You may have a different format you like to follow.)

I’m in pretty good shape here. Lanternfish was 110K words, so coming in shorter ought to be easy enough. What I have to do is get to the point. We’ve met the characters, their motivations, and wounds already. I don’t have to dedicate a lot of pixels to that part of the tale.

I’m currently writing this one, and know how it’s going to turn out.

Book Three: This is what your readers have been waiting for. They hung in there through thick and thin, and they have faith you can bring this home. Your goal is to do nothing less than pull off a miracle. Well, your characters have to do that, but you might, too.

Things are grim. They’re likely to get worse. Then a sliver of data shows up that might give you one last chance. Of course your hero/ine has to take it.

Meanwhile, back in a galaxy far, far away… The good guys are all alive, but their ability to wage war is all but gone. They come up with one tidbit of intel that Vader is coming to the new Death Star to kick ass and chew bubble gum. And he’s fresh out of bubble gum. The heroes can bag him by taking out the new weapon. They don’t have much in the tank, but they’re going to assemble the troops and take one last shot at it. It’s a life or death battle they face.

Obviously, they squeak by and the universe is saved. Fireworks, dancing Ewoks, etc. There is one hell of a lot going on besides my interstellar flyover. Luke has daddy issues, and sister issues, and the Force is in play, light-sabers, etc. Obviously, your trilogy is going to need that kind of intrigue, too. This post isn’t about that stuff. It’s about the basic structure of the classic trilogy.

I have most of an outline (storyboard) for how I intend to follow this structure in my own trilogy. I’m knee deep into book two, and hope to have it out next year.

38 thoughts on “The “classic” trilogy”