Hey, SE Readers. Joan with you today with the fourth in a series of posts about using the five senses in writing. Today’s post is about the sense of sound. If you missed the first three, you can read them by clicking the following links: 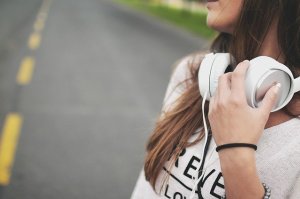 It’s been said, “Silence is golden.” In reality, sounds are everywhere. Even if you’re in a quiet house without the noise of a television or radio, there are still noises. The humming of a refrigerator. The whir from an air conditioner. We’ve become so accustomed to these sounds, we barely notice. But if your electricity fails, you’ll discover how quiet your house is.

Like with the other senses using sound, or in some cases the absence of, can help convey a character’s emotions.

In the song, “I Think I’d Rather Be a Cowboy,” singer/songwriter John Denver wrote a line that I’m envious of. I don’t have permission to use the lyrics, so I’ll not quote them, but if you’re interested, I’ve provided a link (opens in a new tab). Read the second line of the last stanza.

In eleven words, he conveyed the narrator’s feelings. Songwriting is tighter than short stories or novels, but the impact on the reader (or listener) is much greater than pages of dialogue or narrative.

What’s the best way to describe a sound? There are pros and cons of using onomatopoeias. Done correctly, they work. If overdone, they can turn the reader away. The consensus is to limit the use of them in YA and adult fiction. Writers of children’s books can use them more frequently.

In a writer’s group I once attended, one member felt as if he needed to use onomatopoeias to convey sound every single time.  He often wrote things like tap, tap, tap, if someone was knocking at a door. For gunshots, we got bang, bang, bang or, or pow, pow, pow.

I understand he wanted to show and not tell, but there are times when it is better to tell. (Can’t believe I’m saying that!) Examples like those above seem amateurish when overdone. Why not say something like, “A knock on the door interrupted Cassie’s thoughts,” or “The sound of gunfire reverberated in the streets.”

In the examples I gave earlier, rustle, chirp, and crackle are all onomatopoeic words. We’ve become so accustomed to them that we don’t even notice. They convey the sound without being monotonous.

Sounds bring unique images to a reader’s mind and can put them in the middle of the story. Think about the different emotions your character as well as your readers might experience with these sounds:

I’ve often heard that if someone loses one sense, another is heightened. In an episode of the television series, MASH, Hawkeye temporarily loses his vision. But during that time, his sense of hearing was enhanced. He talked of one world closing but an entire new one opening up.

Sounds can also be pure imagination. If your protagonist is walking alone at night in a dark forest, she might imagine hearing footsteps. Someone grieving for a lost loved one could “hear” that person’s voice.

Your turn. As a reader, what are some examples of sounds that invoke emotion? As a writer, what things have you used?