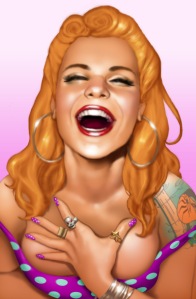 Hi, Gang. Craig with you once more. This time I want to wrap up the mini-series about writing comedy. In the previous two posts, we gave a list of common situations you can use, or modify into your own work. Read those posts here and here.

I’m sure there are many more situations that work as plotted elements for your stories. I’m known for living documents, and those notes came from one of my documents.

This wrap is about the other kind of comedy. Those things that just come to you on the fly while drafting your story. For this to work, you have to keep an open mind.

I’ve had some wonderful things come to me on the fly. Many times it comes after I know my characters a bit better. There’s always one who’s prone to make a smart remark. At those times, I write them into his/her dialog. Sometimes, I take them right back out, occasionally they remain. This works well in buddy stories where the main characters can banter a little.

A prime example is the root monsters. These are some of my most popular characters from my pirate fantasy. It all started when a witch doctor joined the cast. I was writing this one on a slower path, and I decided I needed something for a witch doctor to do. It wasn’t enough to just stick the label on him and leave it at that. Readers deserved a little taste. At the end of my writing weekend, he’d grown these four creatures in a pot to serve as camp guardians during the night. I fully expected them to wither and die the following day.

They worked on me during my weekly commutes. Swarms are scary and this could be a good thing. When I opened my MS the following weekend, they turned out kind of snarky, but dumbly happy. Since their creator had been an enslaved islander, they spoke a variety of pidgin English.

Today, I think there are around twenty of them, but only about a quarter have names. Readers seem to love them, so they remain in the subsequent stories. This is a long story to make a point. If I hadn’t been open to letting the characters take over, they would have been a footnote to the story. They’ve proven quite helpful to me, because it gives me a chance to schedule a breather in the action by using their antics.

I picked up in previous comments that some authors don’t see themselves as funny. You might not be, but I want you to ponder something. Many of us were repressed as kids. You know who you are, but probably grew up with lines like, “Children should be seen and not heard.” I’m going to propose that it was probably worse for the girls than the boys.

Fiction is a good place to let go of some of those thoughts. You probably had that one hilarious aunt or uncle. What would they say under the circumstances in your story?

Toss a few things into your draft and let your critique partners and beta readers give you feedback. Maybe it works, and maybe it doesn’t. Much of what we do is like a muscle. If you exercise it, it gets stronger. Comedic bits work the same way. You’ll never know if you don’t try.