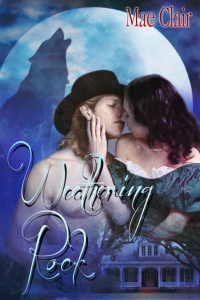 Drawn together across centuries, will their love be strong enough to defeat an ancient curse?

Colonel Caleb DeCardian was fighting America’s Civil War on the side of the Union when a freak shower of ball lightning transported him to the present, along with rival and former friend, Seth Reilly. Adapting to the 21st century is hard enough for the colonel, but he also has to find Seth, who cursed him to life as a werewolf. The last thing on Caleb’s mind is romance. Then fetching Arianna Hart nearly runs him down with her car. He can’t deny his attraction to the outspoken schoolteacher, but knows he should forget her.

Arianna finds Caleb bewildering, yet intriguing: courtly manners, smoldering sensuality and eyes that glow silver at night? When she sees Civil War photographs featuring a Union officer who looks exactly like Caleb, she begins to understand the man she is falling in love with harbors multiple secrets–some of which threaten the possibility of their happiness.

Finding a decent guy who’ll commit is hard enough. How can she expect Caleb to forsake his own century to be with her?